We make your author life easy!

Get essential tips, news, and freebies delivered to your inbox.

No fluff, no spam, no wasting your valuable writing time.

Raise your hand if online activities ever seem like a big drag.

Social media can teeter into time-suck and become a grueling slog if allowed to fester. One great danger is to let these online platforms become another intense writing gig which demands hours of backbreaking labor and focus which pull us away from the books we need to be writing. Nurturing balanced habits can help any author walk that line, effectively.

A-game Advice is a weekly column offering practical tips for winning promo that fits your personal style, strategy, and measure of success.

Have you ever wondered why social media is free: because they want to sell your eyeballs. Your traffic brings them money….because your actions lure more eyeballs which they can sell to advertisers. All platforms seek to corral certain kinds of user by offering certain kinds of information and tools, supporting themselves via targeted advertising to the gathered herds. Fair enough.

On its face, social media simply offers us opportunities to encounter like-minded and likely-interested people who might dig our work. 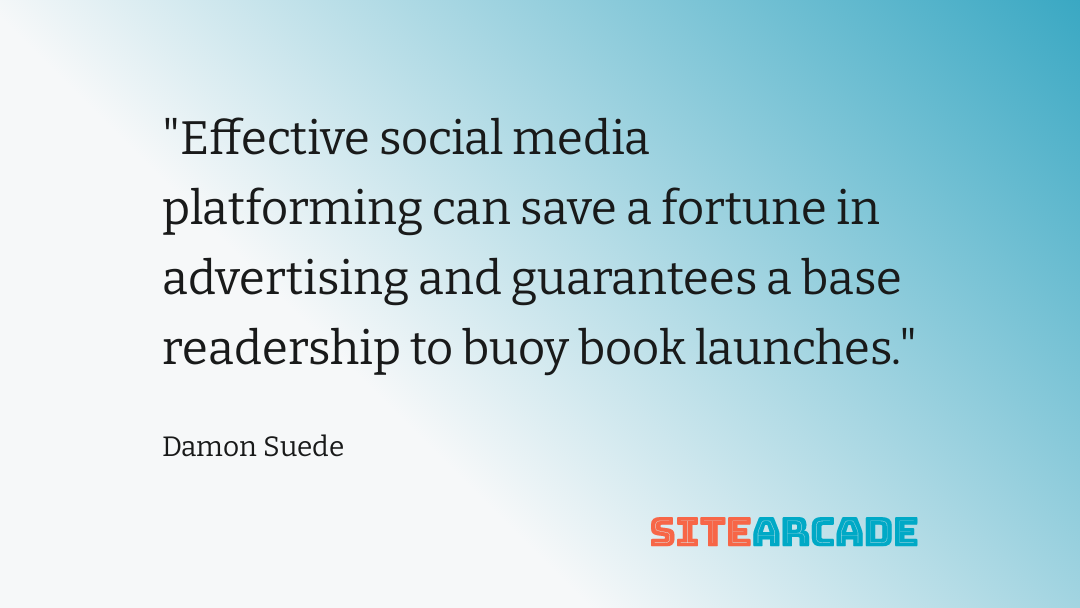 It’s called social media for a reason. You want to create real, lasting relationships over time with your unique audience. These days the genre market is volatile and readers, overwhelmed with options and dreck, often don’t know what to read. Reader retention and cultivation is infinitely more efficient than creating a brand new audience every time you launch a book. Effective social media platforming can save a fortune in advertising and guarantees a base readership to buoy book launches. Nowadays, developing a loyal fanbase is critical.

Any online platform operates like a watering hole in the desert. Living things congregate near sources of water. That’s true in the desert, the jungle, and every city ever founded. All the animals for a hundred miles will eventually make their way to the water because dehydration is death. And consequently, apex predators will also learn to hunt near the oasis because of all the easy pickings. We all seek out safe spaces where we can do our thing without danger, a trust which in itself creates danger. Your goal is to find social media “watering holes” that keep you hydrated without having your throat torn out.

The trouble is that every other author on the planet needs the same thing: access to likely readers, fresh eyeballs, a place to pimp the goods. We all have books to sell. And because humans are humans, the lazy folks will do as little as possible while the clever types will discover hidden opportunities.

Back in the day, the ubiquity and low cost of early social media seemed a panacea. (“Married in the chatroom” or “I made millions on MySpace!”). We now know, at least I hope we do, that nothing is easy and free is always expensive. These days social media all too often baffles, irritates, and exhausts authors…if we let it. It infests our phones, derails real world conversations, and distorts our perception of relationships and values.

No two authors or careers are the same and that means that your use of social media requires customization. In the early days of Web 2.0 authors often heard that they had to have an account at every platform: Facebook, Twitter, Google+, Pinterest, Instagram, Goodreads, Youtube, you name it…not to mention a blog and a newsletter. Everyone needed to be everywhere. That’s nonsense.

If you try to maintain too many different social media accounts you will never have time to write or sell what you write. Don’t ape your peers out of knee-jerk obedience; what works for them may actively undermine your goals. You don’t get points for cursory drive-bys. If you suck at a certain format, skip it! Budget your time and energy. Pick one to three platforms that serve a useful function and cultivate them gently and consistently over time.

Maybe you just don’t have ways to connect your work with readers. My friend Lyla Bellatas is incredibly chatty and charming but for a long time social media felt (as she put it) “like shouting into space.” Even she couldn’t think of what she should be talking about, until she started connecting with likeminded people via hashtags and topics that see steady traffic with fans and writers alike. There’s no reason you can’t develop an artillery of things to use when you aren’t feeling witty and spontaneous. This can be as simple as:

Remember, you don’t need to share personal details, but you do need to be social. Find common interest points so that you connect with the right folks. Look to create an ongoing relationship with fans and colleagues, slowly and meaningfully.

No one social media platform is the be-all, for anyone. Different genres, different authors, different functions require a different feature set and a different user pool. You waste everyone’s time when you post:

In addition to writing sexy contemporary and paranormal, Katana Collins is a popular photographer and performer with strong connections to the world of comics, so visual- and video-friendly platforms work like gangbusters for her. Delilah S. Dawson is a quippy, quirky cross-genre writer with an epigrammatic style which shines on Twitter.

Learn the distinctions between users and tools on the various platforms you inhabit and learn when and how they are used most effectively. It will help you spend your time efficiently, and spare you hours of wasted blather.

Hammering people with anything sends the wrong message. Frantic hard sell drives readers away, especially if it’s of your own work. Relentless promo is a no-no, full stop. But when an author starts posting every fifteen seconds on social media, it’s a sign that they’re trying to COERCE connections rather than building them organically. Court your readers. Woo them. Romance them. Joke with them and share your real self with them. Remember: the nerves that fire together wire together; you want folks to associate you with the emotions common to your work. You don’t want anyone to see your name and think, “Ugh, pushy and desperate.”

Think of it as a conversation at a party. Learn to read each room for its distinct character, interests, and rhythm:

Having a million followers on Twitter or facebook sounds great…unless they have no idea who you are and will never buy your work. Impressive numbers that don’t have any followthrough mean diddly. Better that you have two thousand followers who are passionate, devoted and talkative on your behalf…then your followers aren’t your whole fanbase, just the die-hard true blue superfans who can do the legwork for you.

This is why the idea of buying clicks or renting followers always seemed to stupid to me: does anyone believe that 50 thousand bots with the same headshot all care what you do? Having millions of followers will only make you a bestseller if those people read what you write. Obsessing about your follower count or the number of “likes” or an of the other metrics on social media will only distract you from their real function: to interact socially with folks who dig your work.

Trying to monitor EVERYTHING constantly is a recipe for exhaustion and boredom. When it comes to social media, you’re going to miss some things until the recap and you should. You have a life and books to write. Yes, there is tons of fascinating telenovela scandal in our industry and yes, it can garner clicks and boost careers. This isn’t 911 or an ER. You aren’t rescuing people from burning buildings by obsessively tracking Pinterest.

Trying to predict lightning strikes is a mug’s game. You cannot be present for everything and you’ll go mad if you try. Even worse, the first folks to know something often get things wrong and wind up having to backpedal and apologize for misconstruing details. Try to schedule short, productive checkins, rather than perching on the rim and waiting for first blood.

In case you hadn’t noticed, platforms evolve and die. MySpace, anyone? Google+? Make sure you aren’t sticking around after the lights have come up and everyone’s bailed. What worked last year may be nixed the next. If you aren’t seeing a regular, healthy flow of new and familiar eyeballs on a platform, don’t invest loads of time propping it up. Remember: the name of the game for everyone is targeted attention.

Social media platforms need you to bring them eyeballs, just as much as you need eyeballs on your work. As eyeballs drift away, you should do likewise. Don’t think of it as “abandoning’ your audience so much as guiding the folks who trust you to a more robust and dynamic place to engage with the books they love. Again, you’re looking for ways to keep the conversation positive and flowing. As a platform collapses, every moment you give that app or forum is attention better invested elsewhere. Know when to cut bait.

Make Social Media Work for You

Social media is only a tool. It will not make or break you, unless social media is your job, not writing. All artists need eyeballs—people who pay attention to their work. That’s the whole gig. Using platforms effectively can assist that process, but only that. As a working writer, you cannot allow social media to become an end in itself. Reader loyalty is the goal.

Here’s an ugly, but accurate comparison: students who ace the SATs aren’t necessarily successful. The truth is, students who ace standardized testing tend to succeed in college, not the other way around. Plenty of wildly successful students suck at bubble tests. Correlations tend to be deceptive. Teaching yourself to take a test does not guarantee accomplishment. Post hoc ergo propter hoc. The test is not success. The map is not the location.

Learning to rig the rules or slip through the cracks will not afford you the career of your dreams. A zillion followers on Facebook, ringside seats to the latest Tumblr scandal? Worthless. Bragging rights only give you a chance to brag about stuff that you (and most everyone else) knows is baloney. If you’re a bestseller, readers already know. And if you aren’t, no amount of platforming will bamboozle them into mistaking you for one. 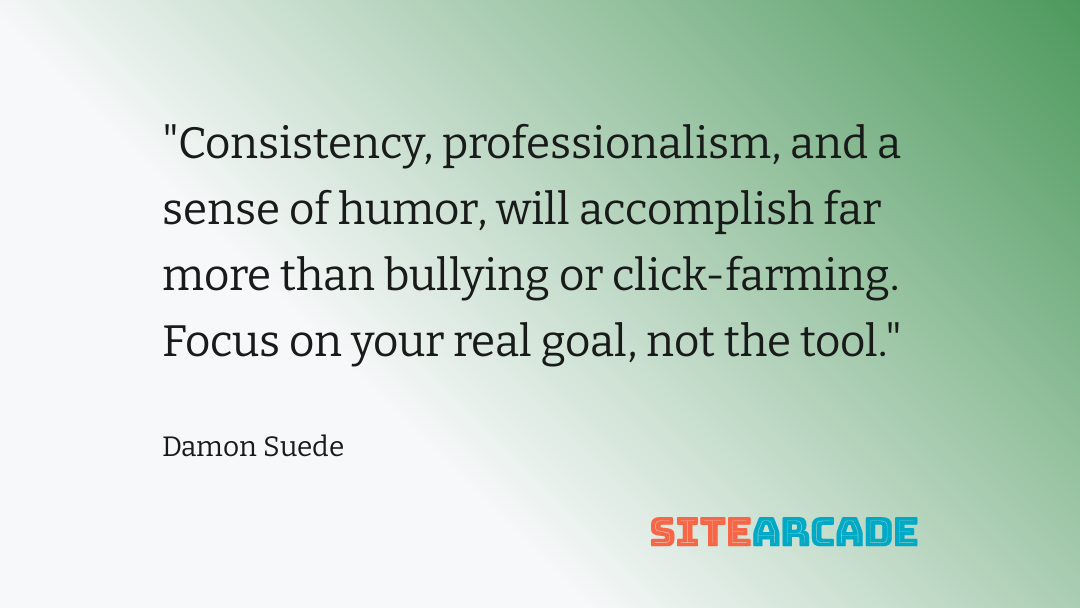 Make sure that you do the work necessary as a social presence, but never forget that it is work. You are allowed time off and regular breaks. Consistency, professionalism, and a sense of humor will accomplish far more than bullying or click-farming can. Focus on your real goal, not the tool.

Make sure that social media works for you and not the other way around.

Damon Suede has released Verbalize (a new characterization & dramatization technique) and Activate (a thesaurus of actions/tactics) as part of his Live Wire Writer Guides. Also check out your-A-game.com for more exercises, worksheets, and strategies for boosting your promotional efforts.

We make your author life easy!

Get essential tips, news, and freebies delivered to your inbox.

No fluff, no spam, no wasting your valuable writing time.